Amazon and Google are undoubtedly tech giants that are trying to expand their position in the market with ever better products. With Amazon Fire TV and Google Chromecast, both companies offer devices in their range that provide access to streaming apps such as Netflix, RTL+, Amazon Prime or Disney+. In this article we ask the question Fire TV vs Chromecast – which streaming adapter is better? We will support you in making the right purchase decision!

For a long time, Amazon and Google followed very different streaming philosophies: While the user interface of Amazon’s Fire TV could be controlled with a remote control, the Google Chromecast could only be used as a casting device. Content from a smartphone or tablet was streamed to the Chromecast and also had to be controlled via the mobile device.

This changed with the introduction of the Google Chromecast with Google TV, which now also comes with a remote control and a controllable interface (“Google TV”). The principle of Fire TV and Chromecast is the same: an HDMI dongle is plugged into a TV and supplied with power via USB. The sticks receive their content via the high-speed internet: Video, music, photos or games can thus be consumed via a large TV screen. Both sticks support ultra-high resolution (4K) with Dolby Vision, HDR10, HDR10+.

The Amazon Fire TV Stick has been around for many years. The latest generation offers 40% more power than Fire TV Stick 4K, according to Amazon, with faster launching apps and even smoother navigation. The Fire TV Stick 4K Max is priced at the same level as the Chromecast with Google TV.

The first setup involves pairing the Fire TV with the owner’s Amazon account. All apps available for the Fire OS can be purchased through the Amazon platform and are stored on the internal memory. This comprises a size of 8 GB – the same size as the memory on the Google Chromecast with Google TV.

Amazon’s latest stick now supports Wi-Fi 6, which, with a suitable router, ensures even more reliable streaming in 4K on multiple Wi-Fi 6 devices. But there is another advantage over its predecessor, the Fire TV Stick 4K: The device is equipped with half a gigabyte more RAM and has a higher clocked quad-core processor.

The uncomplicated set-up does not hide the fact that an account with Amazon is absolutely necessary. This is also the case with the competitor Google; however, the shipping giant requires payment data and an address to be stored in the account. Google collects much less data in this case.

In addition, the stick is only available in one colour (black), while the Chromecast is available in white, blue and pink. 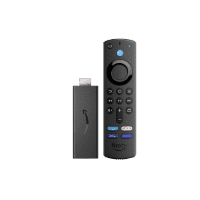 The biggest disadvantage is the need for an Amazon account with a lot of personal data. On the other hand, the latest version of the Fire TV stick now also supports Wi-Fi 6.

The Chromecast Ultra was the last device from Google that was based exclusively on the casting philosophy. Since autumn 2020, the Google Chromecast has supplemented the portfolio with Google TV. The focus is now on Google TV, an interface that works under the Android TV operating system. Under the “For Me” tab, it diligently makes streaming recommendations, not only for films and series on Google Play, but for all relevant streaming services.

Thanks to the integrated Dolby Vision as well as the HDR10 and HDR10+ formats, the Chromecast is able to play this content on high-end TVs in this way. This makes the Chromecast a multi-talent.

Compared to Google Chromecast 3rd generation or the Chromecast Ultra, the remote control is a real advantage. For a traditional TV experience, the Chromecast can finally be used independently of the smartphone. Nevertheless, Google retains the casting function in case the provider does not yet support a native Android TV app.

In addition, Google is already one step further in terms of offering the integration of a cloud gaming service. Thus, the TV stick turns into a gaming console after being paired with a suitable controller. Amazon has already launched a similar service (Amazon Luna) in the United States – in Germany, however, this functionality is not yet available.

Besides Chromecast and Fire TV, there are other streaming players on the market. These include the American market leader Roku, which now also wants to score with its products in Europe. Apple is also trying to win the favour of customers with its Apple TV 4K.

In addition, the Android TV operating system requires almost half of the internal storage space. 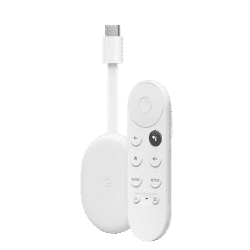 The biggest disadvantage is the insufficient storage space. You also have to do without Wi-Fi 6. On the other hand, the stick is compatible with the Google Stadia cloud gaming service.

Both Amazon Fire TV and Google Chromecast generally offer free streaming apps; however, a monthly fee is charged for the well-known services Netflix, discovery+, RTL+ and Joyn. In a direct comparison, we did not notice any significant differences in the selection of content. All relevant apps could be found on Fire TV as well as on Chromecast (Google TV). Only the NOW app (Sky) is missing from Google TV – here, content can still be cast from the mobile phone.

In terms of streaming recommendations, Amazon’s own offering dominates. Three of the five teasers on Fire TV referred to Prime Video. The range of Prime content also predominated in the personal recommendations.

With Google TV, the services for which the user receives suggestions for content can be selected individually. In addition, the content is provided with a rating from Rotten Tomatos; Amazon relies on its own film database IMDb.

The Fire TV Stick scores points, however, with the integration of Live TV: in addition to the film and series content, the viewer receives information from the electronic programme guide (EPG) on the TV channels to which he or she subscribes.

Both sticks are equipped with an internal memory of 8 GB. However, the Chromecast with Google TV already requires 3.6 GB for its operating system. With its competitor Amazon, 2.63 GB are sufficient for the FireOS. This means that the Amazon Fire TV offers more storage space for apps.

Amazon’s remote control has four direct selection buttons on which providers such as Amazon Prime and Netflix are already pre-assigned. Google’s counterpart is limited to two of these preset buttons – for YouTube and Netflix. What unites the two manufacturers again is the control wheel for operating the interface. In addition, both integrate their voice-controlled assistance systems: Google Assistant and Amazon Alexa respectively. With both streaming sticks, they are only available at the touch of a button.

It is probably more a matter of personal taste that decides whether the next streaming stick in the household will be equipped with Fire TV or Chromecast. Both the Google Chromecast with Google TV and the Amazon Fire TV 4K Max are the high-end products of the respective providers. They differ only insignificantly in terms of technical specifications.

While the Amazon stick offers better Wi-Fi; it is more penetrating in the film and series recommendations of its own streaming offer. The Google Chromecast with Google TV is equipped with a slightly better processor – but this is not particularly noticeable in daily handling. The operation of both sticks runs smoothly, without jerks or dropouts.

Whether it should be one stick or the other could ultimately be decided by the price: Prime members could grab the Fire TV for half price on certain days. For Android users, a discount in the Google Store could make the purchase decision easier.

With the analogue switch-off of TV programmes, the distribution of FM programmes also ended in Vodafone's cable network. The cable network operator needs the...

Television from anywhere in the world, that's what not only holidaymakers but especially expats want. While Zattoo or waipu.tv can only be used within...

6 Healthy Snacks You Need to Eat Before Your Next Workout